In a June, 2000 USA Today article Jimmy Buffett names Ten of his  Favorite Watering Holes in the world. Two of these are in the Florida Keys: Louie’s Backyard Restaurant and Lounge in Key West and Alabama Jack’s in Key Largo. Speaking of Alabama Jack’s, Buffett commented that many of the characters looked like they crawled right out of the Everglades. 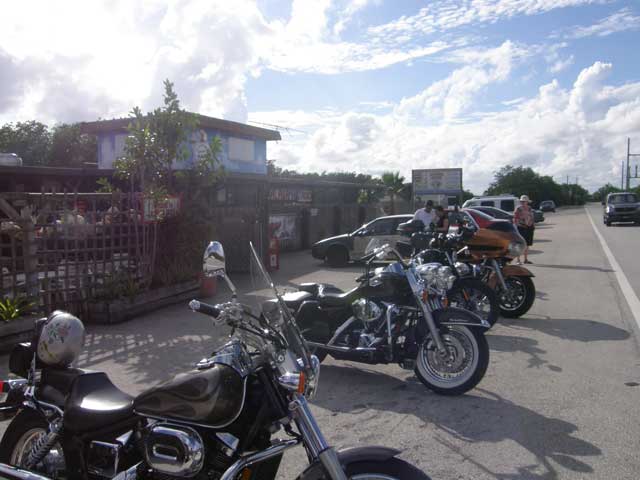 Alabama Jacks on a Sunday Afternoon

It is a favorite of bikers and Joy, who knows the owner Phyllis says of Alabama Jack’s, “Most of the bikers who show up at Alabama Jack’s are attorneys from Miami who ride their Harleys on Sundays and don’t drink alcohol, but they gather and eat superbly-cooked conch fritters and Key lime pie.” 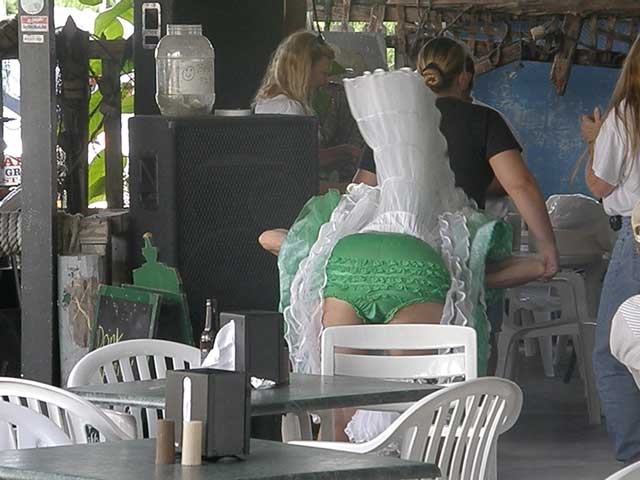 And on Sundays you might be lucky and see cloggers on the dance floor. Betty clowned for us and gave us a clogging flip (left).

They advertise “Best Conch Fritters in the Keys.” The whole family can enjoy this Keys watering hole.

The Caribbean Club in Key Largo has a long and vivid history. In 1935 Carl Graham FIsher, famed Florida developer built the club as a “poor man’s retreat;” this was his last venture. (Below: The view from the bar of the Caribbean Club includes Patrick.) 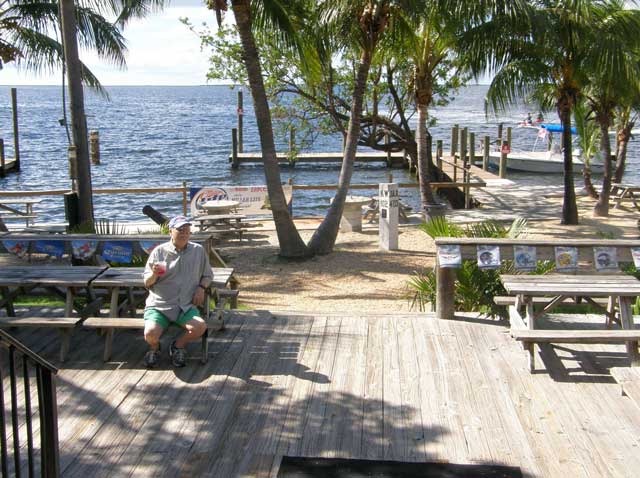 Caribbean Club has been around for so many years

Publicity hype touts the Caribbean Club as being part of the 1947 movie “Key Largo” that starred Humphry Bogart and Lauren Bacall. Memorabilia of the film is still seen on the walls of this fun watering hole. Bogey (below) is joined by Patrick and Shane, the bartender. 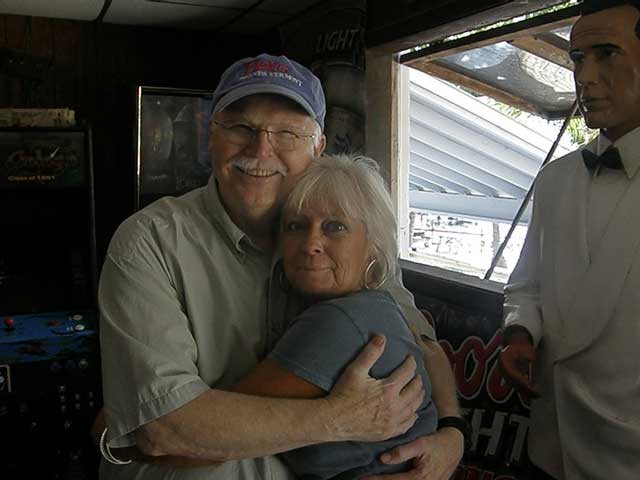 A fire in 1955 changed the tenor of the club, but don’t fret-it is still up and running better than ever. (Below Chloe, Big Mill B&B Innkeeper, enjoys the views and characters at the Caribbean Club.) 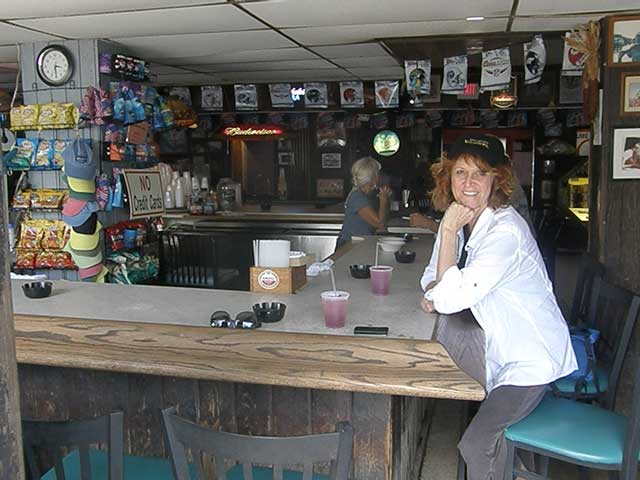 Built in 1937 just after the devastating hurricane of 1935, Papa Joe’s Bar and Marina has been around a long time. The bar seems to come and go but hopefully it can make it. This is a great place to catch a sunset. (2013 update: Papa Joe’s is gone, a victim of hurricanes and trends.)

And for real Keys characters you can’t miss the Paradise Pub in Key Largo. Great food and open late at night.

Yep, that is Chloe the Innkeeper (below) shooting a game of Eight Ball at the Paradise Pub, a real Shark in Paradise. 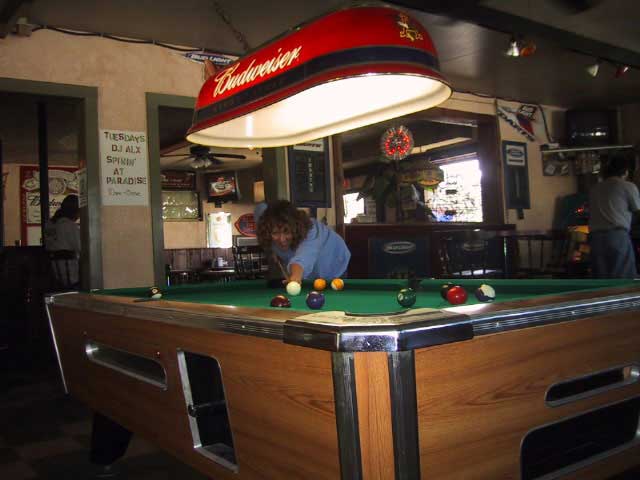 “Frankly, Scallop, I don’t give a clam.” Great sign at the Mandalay in Key Largo. The Mandalay was once a favorite hangout of locals, who stopped by after work to grab a brew. It is totally gentrified now; nice, but you won’t see many Conchs here. 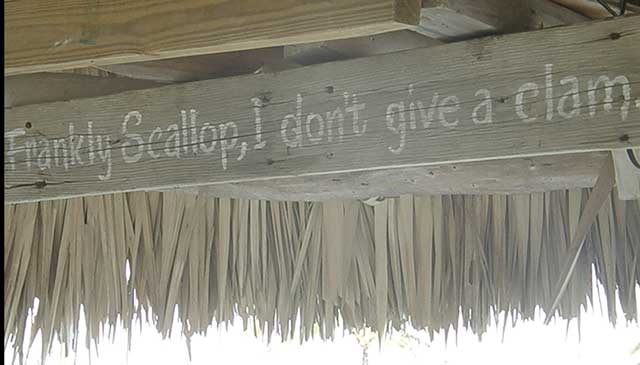 Mandalay in Key Largo is a bit gentrified these days. @BigMill | www.chloesblog.bigmill.com/keysy-bars-of-the-florida-keys-part-two

This Keys blog story is dedicated to some of my favorite Keys characters: George and Louise Scott and old Mr. Ed, who has seen his last sunset and has moved on to a better houseboat somewhere out there. 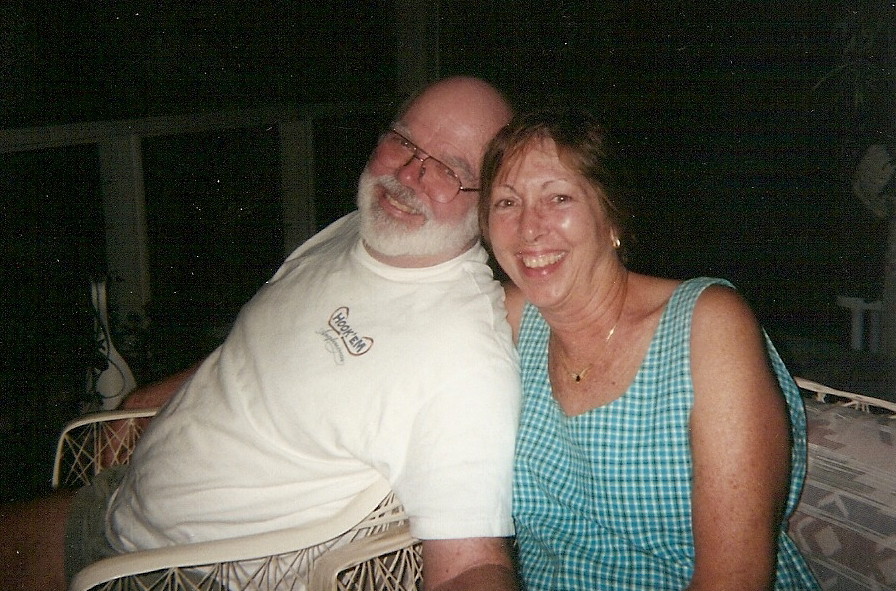 George and Louise clean up so well that I had to search to find a Keys character photo of them. Mr. Ed was always in his Keys persona, no matter where he was. We miss him, cantankerous character that he was.

Thanks to Florida Keys historian Jerry Wilkinson for sharing his knowledge of these historic places, characters, bars and watering holes. His information about the colorful history of the Caribbean Club would be a great Chloe’s blog entry all on its own.

I take some time off from running Big Mill Bed & Breakfast in Williamston, NC 252-792-8787 every October . I go to visit George and Louise and Joy in the Florida Keys. I know why they love it so much.

Next post: Tobacco from the Window of Big Mill Country Inn