Fossil Hunting and the Fossil Museum in Aurora, N.C.

Big kids and little kids like to dig in the dirt. When I was growing up on the farm here in eastern North Carolina, if we dug deep enough we could find a fossil. It was so exciting to get those remnants from the past and to know that right where we were digging was once under water.

Life in Aurora, NC 17 million years ago – when these creatures died, they left their bones.

If you don’t have a creek or a farm for digging, don’t fret – you and your children can dig in the big pile of sand at the Aurora Fossil Museum in Aurora, NC, opened in 1978.

Beaufort county has phosphate reserves, so companies like the old Texas Gulf and Sulfur (now PCS) dig huge holes in the earth to mine the phosphate. In these pits, are many sharks’ teeth;  in times past  this “marl” dirt from these pits was used to fill holes in the road. 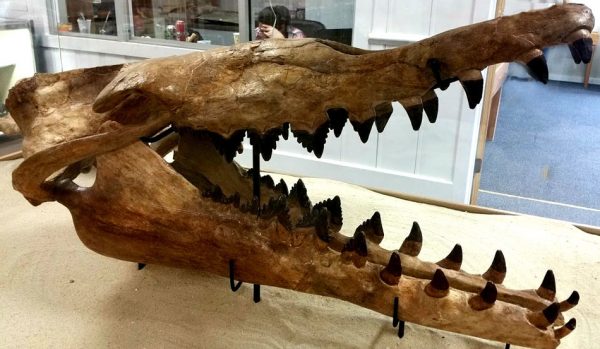 Oh, What Large Teeth You Have, Mr. Shark!

You will see all sizes of shark’s teeth, dinosaur bones and some really old shells. Some of these items are as much as several million years old.

The Fossil Museum is on Main Street in the tiny eastern North Carolina town of Aurora. As you enter, you will see a case of wonderful jewelry made from shark’s teeth and fossils. Jewelry sales help support the museum.

A fun thing to do while you are in the museum is to get your picture taken in the jaws of a shark!

HOVER OVER PHOTO TO PIN FOR LATER

The Fossil Guy lists 14 sites to dig for fossils in the mid-Atlantic states, and Aurora is on this map. He suggests a good book Fossil Collecting in the Mid-Atlantic States for folks who want to learn about this fascinating hobby.

Previous post: Luscious Candied Figs Are the Food of Kings