Vollis Simpson, called the
Junkyard Poet of Whirligigs and Windmills
by the New York Times 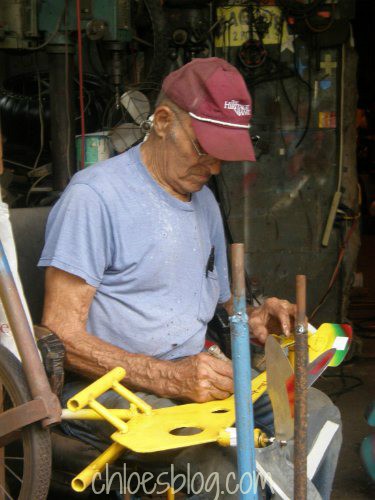 Volis Simpson at Work in his Shop

Vollis Simpson is a craftsman of brightly painted metal art –
giant creations he calls windmills and we call whirligigs.

Driving through eastern North Carolina looking for Lucama and Vollis Simpson’s Whirligig Farm, you begin to wonder if you are lost. And then around the corner, there they are – colorful, folksy whirligigs erected atop tall poles, all spinning and creaking and shining in the sun. With reflector tape on the spinning blades, they shine in the moonlight too.

I met Mr. Simpson last summer. He was working in his shop – I was kinda hanging around and he invited me in. His workshop is stuffed … really stuffed with his metal creations, all made from objects he has collected. I saw a slight grin when he told me about the 85- foot whirligig he made for the American Visionary Art Museum in Baltimore; I think he used a toaster in that one. 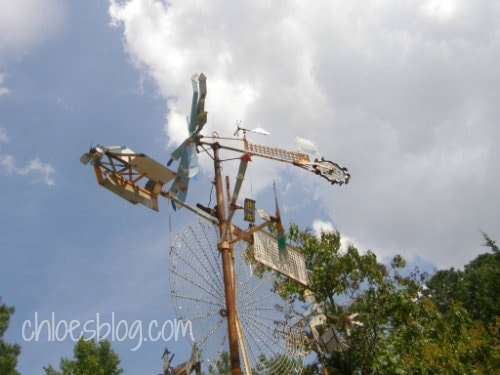 Just this week we had fun mom and daughter guests Anna and Kate, who drove all the way from Philadelphia to see Vollis Simpson’s art work and to stay at Big Mill B&B.  Kate wants one of his creations and I bet she gets one.

This is American Folk Art, sometimes called Outsider Art. Whatever the name, it is worth a trip to the small eastern North Carolina community of Lucama.  But go now, you might be able to sit and talk to Vollis Simpson, still working at 92.

And buy something. I did and my wonderful helicopter whirligig loves living on the farm at Big Mill Bed & Breakfast. 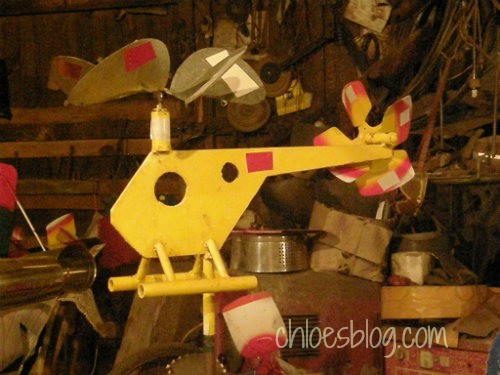 Try to go on a windy day or a windy night with a full moon.

Update: the city of Wilson, NC, has purchased Mr. Simpson’s whirligig collection and they are now in the Vollis Simpson Whirligig Park that will open November, 2013. The General Assembly of North Carolina voted in June of 2013 to honor Mr. Simpson and to make the Whirligig the North Carolina’s folk art symbol.

‘hope you will stay with us at Big Mill Bed & Breakfast in Williamston, NC, while you visit the Whirligig Park

Next post: Hummingbirds at Big Mill : A Bird’s Eye View